The $4.5 million structure was funded by the City of Greenville's Hospitality Tax, which must be spent on tourism-related facilities. 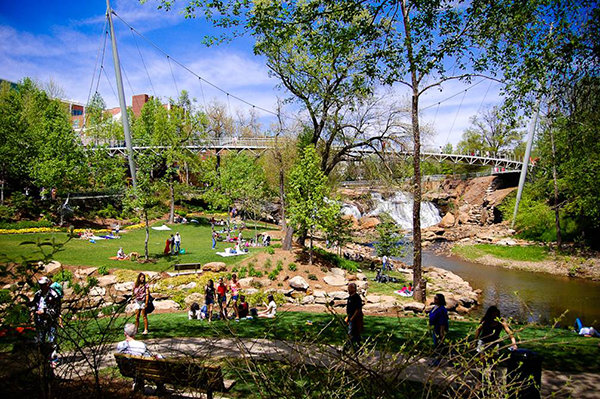 The Liberty Bridge was constructed over a period of 12 months by Taylor and Murphy Construction Co. of Asheville, N.C., designed by bridge architect Miquel Rosales of Boston, and engineered by Schlaich Bergermann.

Chris Britton, structural division manager for Taylor and Murphy, describes the bridge as "an ultra lightweight bridge, which almost looks like it's floating on air."

At 345 feet long, 12 feet wide and 8 inches thick, the concrete reinforced deck is supported by a single suspension cable. The deck's distinctive curve has a radius of 214 feet and it is cantilevered toward the waterfall from supporting cables on the outside. The bridge deck also inclines 12 feet or 3% from east to west over the river.

There are 3 primary cable systems that work with and against each other to support the bridge and hold its position. Underneath the deck, three 80 millimeter diameter "ring" cables provide support and place it into compression in the horizontal plane. The 28 millimeter hanger cables work against the ring cables horizontally and with them vertically.

The hanger cables are set at 35 to 60 degrees from vertical and are supported by the catenary or main cable. The main cable is actually 3 separate 80 millimeter cables – 2 spanning from the abutment blocks to the steel mast and 1 spanning from mast to mast in the center of the span.

The 2-90 foot tall masts weight more than 28 tons each and lean away from the bridge at a 15 degree angle. There are 80 millimeter backstay cables that hold the masts in position. Steel piles and rock anchors, 70 feet deep into bedrock, transfer the bridge loads to the ground at the abutments, mast and backstay foundations.

While bridges with similar structural concepts have been built in Europe, this bridge is unique in its geometry and there is nothing like it in the United States.

Below the bridge the 28 foot Reedy River Falls is the site where Greenville's first European settler, Richard Pearis, established his trading post in 1768. Later he built grist and saw mills at this same location which was the hub of early industry in Greenville until the 1920s.

Miguel Rosales, AIA, is President of Rosales and Partners of Boston, MA. With more than 20 years of lead design experience worldwide, Rosales is recognized internationally as an expert on bridge aesthetics and design. Below he shares his thoughts and ideas about the creation of Greenville's Liberty Bridge: 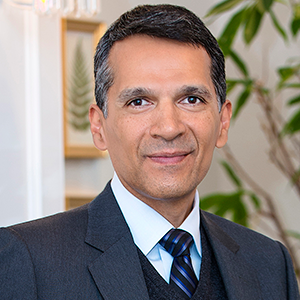