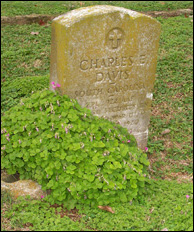 Old African-American cemeteries are rarely documented. They infrequently appear on maps and almost never are shown on historic plats. During slavery, African Americans attended the white churches and worshiped in the balcony of the church. They were buried either along side of the slave master's family or a separate section of the graveyard. For this reason, you will find throughout Springwood Cemetery hundreds of slave graves. It just was not important to most plantation owners to show the location of "slave burial grounds." These burial grounds, used for generations, are rarely documented by deeds or other legal instruments.

When slavery was abolished in 1865, beginning 1867 slaves were dismissed by letter from white churches to find a place to worship and a place to bury their dead. They started worshiping under a "brush arbor," a structure built from four sticks which supported brush used as a ceiling across the top with no walls.

Most of the churches in the county provided a burial ground. Churches in the city did not provide a burial ground; therefore, private cemeteries like "Richland Cemetery" and the "Hillcrest Cemetery" located in the Brutontown community were established. These cemeteries, however, are often well known to the rural African-American communities. In some cases, traditional and historical resources fail to provide certain pieces of information; therefore, long-time residents and local historians in the community provide valuable information otherwise not documented. Too often these local resources are not sought.

Traditionally, the dead was carried to the home and remained overnight for visitation. Their favorite chair and bed were draped with a black cloth. The funerals took place on Sundays.

Richland Cemetery was one of the first African American cemeteries in the City of Greenville, South Carolina. The name bears the name of the creek "Richland Creek," which is a branch of the Reedy River. The property was deeded to the City of Greenville for $2,125.00.00 in 1884 by Miss Elizabeth and Emmala Jones, who were matrons at the Anne Cigar Company. They lived at 702 East North Street. According to the 1884 deed, the Jones' deeded over to the City two lots; a two-acre lot and a 17-acre lot; located at "Spartanburg Road and Richland Creek" and "Cemetery/Tanyard" properties, respectively. In 1886, Z. Turner was the "keeper" and in 1907, Isaac Johnson was the Sexton, followed by Gaines Johnson as Sexton in 1915.

The first mention of the property as "Richland Cemetery" was in 1896, according to the City Directory dated 1896-1897.

Over the years family plots were purchased in Richland Cemetery. Families were given deeds (written documentation) to identify location of the graves; however, many graves in the cemetery are unmarked; therefore it is difficult to determine the number of unmarked graves.

It was reported in an article entitled "Richland's Unknown – gone but not forgotten" in the Greenville News dated February 3, 1983 that in 1907, a beautification report refers to the "new colored cemetery on East Elford Street" which indicates that the new location was "make shift" and unsuitable, its size inadequate, and its presence a danger to the neighborhood and to the city. "It is a costly mistake," the report continues, "it would be better for all parties concerned to seek a more level and suitable location farther out." Richland remains in its same location today.

The cemetery grounds were maintained by a sexton who lived adjacent to the site. He was responsible for selling lots, opening graves, and maintaining the walkways. By the 1940s, all plots were purchased. A six-grave lot sold for $10, according to former Springwood Sexton, the late Tom Garraux. Deeds are now the only way for a family to prove with certainty ownership of a plot.

The problem of identifying lots resulted from a fire at the Sexton's House which occurred some five (5) decades ago, destroying the records, according to Paul Ellis, City Parks and Grounds Administrator. It is uncertain when the fire took place. Another problem with identifying lots arose from the fact that families do not maintain their deeds or pass them on to another family member. Some plots are unused, others contain graves, but no tombstones. Many families could not afford tombstones. Other plots have been neglected or forgotten due to relocation of family members to other areas outside the city or state. Photo of grave at Richland Cemetery

In order to properly identify and maintain grave sites and preserve their historical value to the community, it is suggested that local officials require the installation of appropriate headstones or markers at the time of burial or shortly thereafter.

According to the City Directory in the 1920s and 1930s there was a "colored settlement" located east of Richland Creek name "Richland Hill." There is no mention of how many families were located in this community.

Today, the cemetery is approximately six acres in size and includes over 1400 documented grave sites. The graves date back from the late 1800s up to the present. Most of the tombstones in the four sections are in good condition. However, there are several tombstones that are broken and destroyed; some are illegible, and others have no inscriptions at all.